The 5 Best Places In Africa For Wildlife Spotting

When it comes to wildlife spotting, Africa remains undeniably popular. In its vast savannahs and rolling plains, wild animals of all kinds run free, providing some of the most exciting wildlife viewing on earth. From the â€˜big fiveâ€™ to giant silverback gorillas down to the small Dik-dik, Africa is the ultimate nature theater.

We understand that with its spectacular offering and variety, it is difficult to decide where to go for the best wildlife spotting. This is why we have put together a list of five of the best places in Africa for wildlife spotting.

Here are the 5 best places in Africa for wildlife spotting:

Kruger National Park, which is located in North-eastern South Africa,Â  is one of the most extended game parks in Africa. It comprises of savannah, forest, and grassland ecosystems, each featuring different landscapes that give the park its magic. This sprawling reserve is home to the â€˜big fiveâ€™ including the lion, elephant, rhino, buffalo and leopard, as well as hundreds of other animal species.

At Kruger, you will also encounter unique species such as the endangered African Painted Dog and rare antelopes like the Sable and Grey Rhebok. If you are a bird lover, Kruger boasts large populations of local and migratory birds.

If you are wondering where to stay- this beautiful reserve features some of the most luxurious bush accommodations in the world. From wildlife lodges to tented camps, you will be sure to find something to suit your budget and liking. To view the wildlife, you can opt for organized safaris atop an open safari jeep or do a self-drive. Whichever means you choose, you can be sure that the magic of Kruger will stay with you for a long time to come.

Located in South-Western Kenya, the Masai Mara Game Reserve is one of the most spectacular game reserves in the world. While it is home to the big five and numerous other wild species, its true splendor comes alive between July-October. This is when it plays host to the most prominent wildlife spectacle on earth- the great wildebeest migration.

During the migration, millions of wildebeests, zebras, and antelopes attempt to cross the crocodile-infested Mara River in search of greener pasture. Needless to say, only the strong live to see another day in this battle of wits. This crossing has been documented as one of the most phenomenal natural events, earning it a place in the coveted â€˜wonders of the worldâ€™ list.

The Mara boasts luxurious accommodation such as Sir Richard Bransonâ€™s Mahali Mzuri Camp as well as mid-level and budget camps and lodges. It is only a 45-minute ride from the Capital Nairobi, or slightly over five hours by road. Just like other parks in Africa, you can have scheduled game drives planned by your tour agent, or opt for a self-drive. While here, be sure to visit a Masai village to learn more about this fascinating culture. 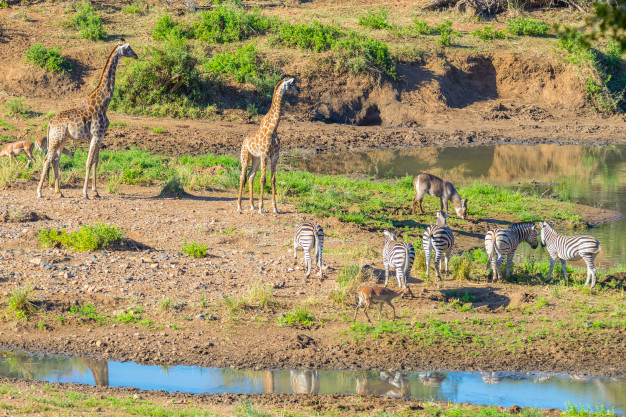 Located in Northern Tanzania, the Serengeti Game Reserve is the quintessential African safari destination. It boasts one of the largest lion and leopard populations in the world, as well as over 500 bird species and numerous grazers. The Serengeti is the origin of the great migration, which starts at Ngorongoro Crater heading north into the Masai Mara in Kenya. During the journey, the wildebeest stop to calve roughly over 500,000 calves inside a month before eventually arriving at the Mara in July.

The Serengeti ecosystem comprises plains, highlands, and acacia woodlands. Â The plains are littered with kopjes, and the Simba Kopje is particularly noticeable. Just like the Masa Mara, the Serengeti features stunning bush accommodation in tented camps of all budgets. You can explore the fantastic reserve using a safari land cruiser organized by your safari expert, or you can do a self-drive.

Located in Northwestern Rwanda, Volcanoes National Park is your ultimate destination to view mountain gorillas. Predominantly a rain forest ecosystem, this park is home to five volcanoes that give it its name.

In its borders is Virunga National Park in the DRC and Mgahinga Gorilla National Park in Uganda, and together these three parks constitute an important gorilla trekking corridor. In this area, you will also come face to face with the highly endangered golden monkeys, mostly found in the Virunga Mountains.

Volcanoes National Park houses ten families of habituated gorillas. Carefully structured tours are organized by park authorities, with only one group allowed to visit the gorillas per day.

Similarly, you can only view the gorillas for a maximum of one hour. Â Tracking gorillas in their natural habitat is an exciting adventure, so do not forget your camera. There are strict guidelines to be followed in the hunt for manâ€™s closest cousins, but these will seem like a small price to pay when you stand seven meters away from a 350-pound gorilla.

Chobe National Park offers a different type of safari experience, giving you the typical wildlife safari coupled with exciting river cruises. Located in Northern Botswana, this southern African Park boasts some of the largest herds of the African Elephant. It also has large pride of lions, hyenas, herbivores, and some rare species such as the Puku. Chobe sits on the borders of Zimbabwe, Zambia, and Namibia, making it a convenient destination from which you can visit other African destinations.

The Chobe River meanders through the park providing excellent opportunities to view animals as they drink. The riverfront offers ready animal viewing opportunities, but if you are looking for real action head over to the Linyanti Marshes, where predators roam free.

You can take a boat cruise down the river as it meanders through the different ecosystems, each more breathtaking than the last. Â Crocodiles and hippos are abundant, as is the birdlife attracted by the towering trees and water.

Chobe features upmarket and budget accommodations and is especially ideal for honeymooners. Â You can quickly fly to Chobe from South Africa, Botswanaâ€™s capital Garberone or even from nearby Zambia or Zimbabwe.

Here you have it, 5 places to visit in Africa that have breathtaking landscapes and wildlife spotting to gaze on. Taking a trip to one of these parks is a safer bet than putting money on the Kentucky Derby contenders, so take your chances and visit them soon.

Content Rally wrapped around an online publication where you canÂ publishÂ your own intellectuals. It is a publishing platform designed to make great stories by content creators. This is your era, your place to be online. So come forward share your views, thoughts and ideas via Content Rally.

What Industries Use Excavators?

Understanding the Physical and Occupational Therapy Changes in Medicare for 2020

Is Surgical Treatment the Best Option to Treat Essential Tremor?